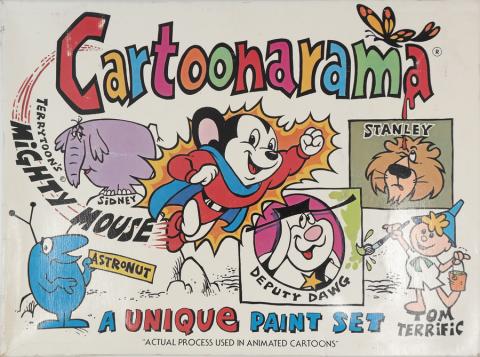 This is a very rare, complete 1970s toy paint set made by Cartoonarama and featuring images of characters from Terrytoons Studios. Cartoonarama created these paint sets featuring popular comics and cartoon characters during the 1970s to offer a way for kids, and adults, to replicate the process of animation. The set contains eight colors of paint, 6 unpainted 9" x 10" cels (for painting), six paper mats to put the cels in for display, one paint brush, and instructions. The outer box measures 10.25" x 13.5" x 1.25". The cels feature images of Mighty Mouse, Deputy Dawg and lesser known characters like Sidney the Elephant, Stanley the Lion, Tom Terrific, Mighty Manfred and Astronut. The set is in very good condition overall. The illustrated box has some edge/tip wear and the top is warped, but the lid still is tight to the bottom of the box. The cels are unused and still in their original sleeve, except Mighty Mouse which is in the paper mat already as it seems to have originally been distributed. The paints still have their original tight shrink wrapped plastic holding the lid shut, but it appears the paint is dried up (as expected after over 40 years of storage.