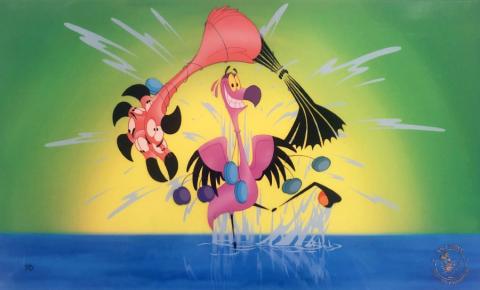 An original employee limited edition from the Walt Disney Studios animated film Fantasia 2000 (2000). Featuring Punkin, the Yo Yo Flamingo, trapping some of the other flamingos at the end of the "Carnival of the Animals" sequence, this hand-painted cel was created by the studio as a gift for the cast and crew that worked on the film. The studio would decide on a few iconic images from each film, offering them to the crew, and they would only produce as many of each limited edition cel as the employees would order, making these employee limited editions much more rare than limited editions made for the general public. This particular piece is number 70 from and edition of 94, as indicated by the number on the bottom left corner. Measuring 14.5"x21.5" framed and with the character image area measuring 8.5"x9", the employee limited edition is in fine condition with light wear to the frame. The original studio certificate of authenticity is included with the piece.