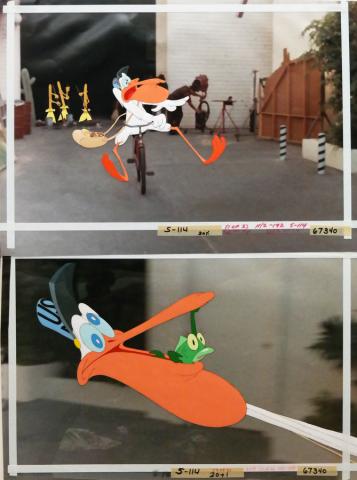 This is an original set of 2 production cels from the Walt Disney Studios production Who Framed Roger Rabbit (1988). These pieces came from the original release of Roger Rabbit through Disney from the Sotheby's auction on June 28, 1989. Included is the original mat which is embossed with the "Art of Roger Rabbit" Sotheby's auction logo, although it has experienced moderate wear and warping. When the studio set this piece up for auction, the character in the top cel of the set was trimmed to image and applied directly to the background for presentation purposes. The cels feature a progression that occurs on the Maroon Studio lot with the Pelican mailman losing control of his bike and a frog popping out of his beak. It was created at the studio and used during production, representing an actual frame of animation that was photographed and appears in the cartoon. The overall measurement of this piece is 30.25" x 23.25" with a mat opening of 10.25" x 16". The measurement of each cel is 10" x 16". The production cels are in very good condition.