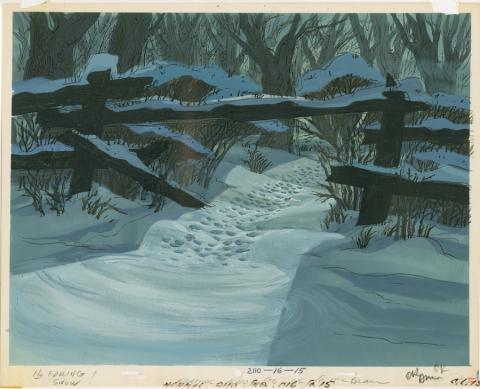 This is an original production background from the Walt Disney Studios production 101 Dalmatians (1961). The piece includes the line cel layer and features the snowy scene background with evidence of the remaining puppy path in the snow even after Pongo has swept part of the roadway area in an attempt to trick Cruella. Backgrounds in this film were painted by Al Dempster, Ralph Hulett, Anthony Rizzo, and Bill Layne. The bottom border note reads 2110/16/15 and "no snow falling!" This background is from a key scene in the movie with no characters in this particular scene, just this beautiful piece of artwork. The overall measurements of the piece are 12.5" x 15.5", with the cel being slightly oversized at 12.5" x 16". This production background is in very good condition with some tape on the cel border.