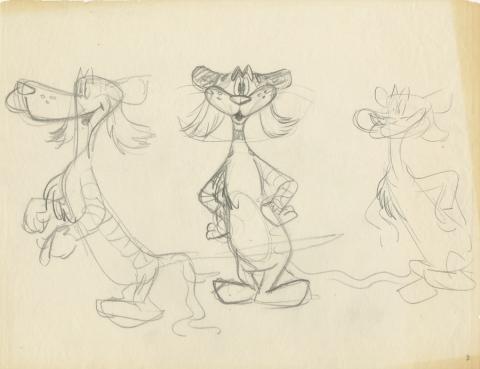 An original model drawing from the Jay Ward Studios animated series Crusader Rabbit (c.1948). Featuring development images Rags the Tiger, the model drawing was created at the studio and used during the creation of the original series in the 1940s. The drawing was designed by legendary animator Grim Natwick, who is known for his years with Ub Iwerks studio, Walt Disney Studios, Walter Lantz Studio, UPA, and the creation of Betty Boop at Fleischer Studios. Very little artwork exists from the Crusader Rabbit series, making this drawing a rare piece of animation history. Measuring 11"x14" overall, and with the image area measuring 8"x13.5", the model drawing is in very good condition with edge wear and light discoloration on the edges.