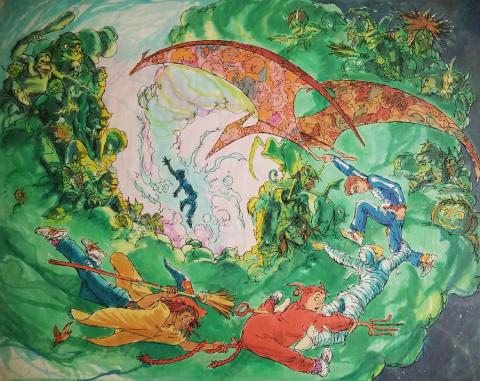 This is an original concept drawing from the Hanna Barbera Studios production The Halloween Tree (1993). This concept features the boys flying through the history of Halloween by holding onto a pterodactyl hang glider in an attempt to rescue their friend, Pipkin. This image would be from early in development as it features only four boys in search of Pipkin, but does not have a girl, as the actual film features. The original image was created by illustrator Floro Dery, who was the character designer for this film. This piece is created in a traditional comic style with all of the color accomplished with marker on paper and the line work done on a xerox cel overlay. The overall measurements of the piece are 22.25" x 26.75" and the image itself measures 18.75" x 23.75". The concept was likely used as a pitch piece when the studio was first developing the film and it was mounted to mat board with spray mount adhesive. The piece is in good condition with spray mount adhesive residue present on the back side of the paper.