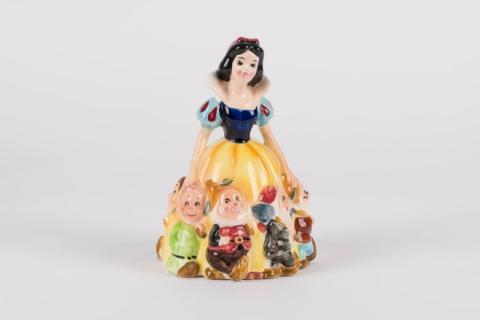 A ceramic figurine inspired by the 1937 Disney Studios film Snow White and the Seven Dwarfs. Featuring a full figure depiction of Snow White with Bashful, Doc, Dopey, Grumpy, Happy, Sleepy, and Sneezy marching around her skirt, the figure was produced by Enesco in the 1960's. The figurine appears to have originally held a mechanism inside (likely a music box) which is no longer in place. Measuring 5”x4.75” and 7.25” tall, the figure is in good condition with some crazing and light wear.