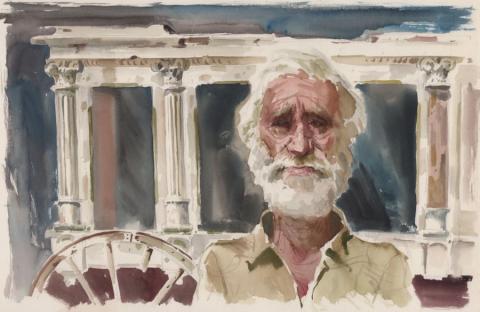 An evocative rough development painting by Imagineer Clem Hall. Featuring a beautiful watercolor portrait of a melancholic older gentleman in front of a stately building and a wagon wheel, the piece comes from a collection of artwork created by Hall during the development of the American Adventure attraction at EPCOT. A master of scenic painting, legendary Clem Hall got his start in the film industry working for MGM studios, and Paramount Studios, focusing on watercolor portraits of the studios stars. Clem later transitioned to Walt Disney Studios and eventually Walt Disney Imagineering. It was here that he designed concept art for many beloved attractions including The Haunted Mansion, Space Mountain and the American Adventure pavilion. Measuring 10.25"x16.75" overall with the image measuring 9"x14.5", the painting is in fine condition.